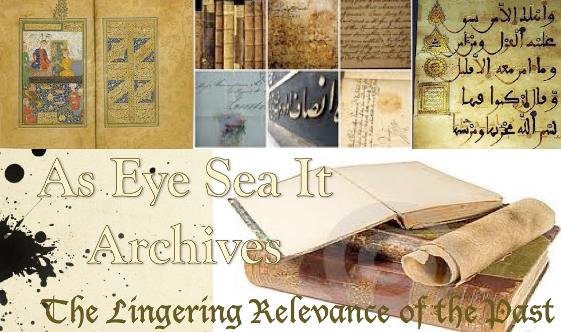 We are often visited by the lingering relevance of the past that questions our assumptions of the here and now. The Archives page dusts off the mirror of time and in its reflection presents in-depth analysis of events that refuse to die in the pages of history. These well-documented articles may be referenced by scholars in their research, provided they give credit to the author and the website.

The Archives page presents articles and essays that have shown resilience in adhering to principles and whose relevance has defied the passage of time.  If we listen attentively to the whisper of conscience, history should not be repeating itself--but it does.

"Tolerance for ambiguity is a prerequisite for being creative, with it one can savor the vibrational blurrings of life's paradoxes, without it reality is a still-life, still-borne."

Half a Millennium of Religious Intolerance in Caucasia and Beyond

The turn of recent events have brought Chechnya into the limelight albeit for all the wrong reasons.  For those who venture beyond the realm of cultural stereotyping we present an historical analysis of Russia’s policy towards the Northern Caucasus region and beyond.

This research and in-depth analysis was first published by The Minaret magazine (June – November 1995) in the aftermath of the Chechen war of independence of 1994.  The Chechens fought bravely and defeated the Russian army forcing Russia to recognize its independence. Pursuant to diplomatic haggling Russia granted Chechnya autonomy in 1996.

When Yeltsin chose Vladimir Putin as his heir apparent, he was given a chance to prove himself worthy of the task.  Once again Chechnya became the sacrificial lamb as Putin reneged on Moscow’s treaty, ravaged Chechnya and turned Groznyy, its capital of 450,000 residents, into a ghost town in 1999.  These atrocities catapulted the ruthless KGB apparatchik to political prominence as the new ‘czar’ in Kremlin.

This analysis does not address these later developments, however, it gives the reader an opportunity to understand them in their historical context presented here in five parts.

Part I - Half a Millennium of Religious Intolerance:

Russian-Muslim Conflicts in Caucasia and Beyond

Part II - Half a Millennium of Religious Intolerance in Caucasia:

Chechnya Will Rise From Ashes … Again

Part III - Murmurs in the Heartland of Asia

The Legacy of Vostochniki: Russia's Ostpolitik

Part V - Freedom on the Horizon

With hindsight, everyone criticizes the insanity and stupidity of the Iraq wars.  With foresight I predicted many, if not all, of the consequences in articles I submitted to many of the leading newspapers and magazines in the U.S whose dismissive silent collaboration with the prevailing madness of invading Iraq rejected my writings in whole and in segments. They wrote their columns with blood then, just as their hindsight punditry is deafening us now.  What the pen inked was trumped by the saber-rattling of ‘experts’ in Pentagonian brass. This writing never saw the light of day before the war.  Some ten years later, we unveil the revelations.

The Day America Lost Its Soul

When the imbedded corporate media played the drum beat of war to convince 65% of the American public that Iraq was involved in 9/11,

When in their hatred for the ‘other,’ Americans turned a deaf ear to the voices of more than 15 million anti-war protesters around the world—the largest in human history,

When the Congress of the United States abdicated its responsibility by cow-towing to the White House bullies and authorized an act of war most of them had not read,

When the Cheney-Bush administration threatened world peace through its in-your-face confrontation by violating the Charter of the United Nations and the Constitution of the United States,

That’s when Americans lost their Republic and America lost its soul.  We are still soul searching in futility.

Ten years later, more than 600,000 civilians have died, over 3 million have become refugees, Iraq has turned into a travesty of sectarian strife we instigated, and Abu Ghraib stains the conscience of humanity, the perpetrators of this crime against humanity in brazen defiance say: “I’d do it again in a minute.”

Had there been no Nuremberg Trials, the Nazis would have certainly been as unrepentant.

The Case Against Iraq

The American leadership reacted to September 11 without having the vision to learn from the paradigmatic shift it represents.  Vision without action is a daydream; action without vision is a nightmare.  The nightmarish campaign for a regime change in Iraq is based on three claims:               Read more

When the Taliban took the reigns of power in Kabul in 1995, the media had a ball sensationalizing their ridiculous restrictions on growing beards ‘Islamically.’ The publication of this article was shelved by the editors of The Minaret so that the politicized agenda of yellow journalism would not get further millage out of the topic at the expense of this article’s accuracy and the serious nature of its content.  The historical analysis of the article, however, remains relevant. We are un-shelving the article after the long hiatus.

Islam is a religion of moderation as testified by both Qur’anic revelations and hadith traditions:  The best of things are done in moderation.  If so, than why are individuals and governments in Muslim societies resorting to extremities in words and deeds?  Worse yet they label their actions in the name of Islam thereby violating the very principles of moderation and truth that the Prophet advocated.