The Women of Afghanistan Won't Be Silenced Anymore
BY HOMEIRA QADERI, TRANSLATED BY ZAMAN STANIZAI

·       THE WOMEN OF AFGHANISTAN WON'T BE SILENCED ANYMORE

The Women of Afghanistan Won't Be Silenced Anymore 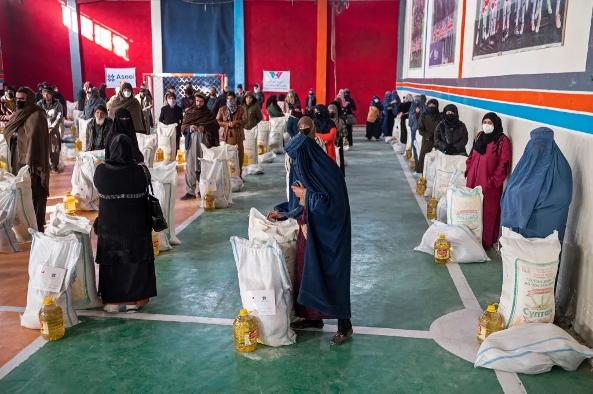 Afghan people stand with food aid being distributed by a non-governmental organization at a gymnasium in Kabul on Jan. 17, 2023. At least three leading international aid agencies have partially resumed life-saving work in Afghanistan, after assurances from the Taliban authorities that Afghan women can continue to work in the health sector.

Qaderi, PhD, is writer, activist, and author of Dancing In The Mosque. Stanizai, PhD, is a professor of Mythological Studies at Pacifica Graduate Institute and a professor of Political Science at California State University, Dominguez Hills

It’s been a year and a half since the United States left Afghanistan, and the Taliban continues to make decrees in an effort to silence and eliminate women from society. Two months into their administration in Nov. 2021, the Taliban sent all women employees of the government home. A month later, they ordered the closure of university campuses for women, and yet another ban calls for the segregation of healthcare preventing women to be seen by male doctors. Afghan women begin each day with confusion, dismay, and fear of what’s to come. In the latest salvo of Jan. 9, 2023, the Taliban threatened the closure of all stores and markets where women work in northern Mazar-e-Sharif and the closure of all beauty salons in Baghlan. The Taliban have denied these claims, but they are giving women a 10-day grace period after which they will be provided “appropriate” locations to work. In Taliban language, that’s a ban in the making.

Worried about my friends back home, I called Maryam (not her real name) whom I remember as a youngster during the first reign of the Taliban in 1996. After the Taliban fell, Maryam returned to school and had to start first grade at the age of nine. She studied economics at Herat University and later married a police officer who worked at the Ministry of Interior. Her husband was killed in a Taliban ambush in 2018. During these years, Maryam was the breadwinner for her children. She was working in a government office until November 2021 when, like most women Afghan civil servants, she was prevented from working in the government office. These latest decrees pose yet another challenge for Maryam to put food on the table for her three children, so Maryam decided to open a sewing shop with two other friends. Although Maryam has decided to move the sewing shop to her home, she is certain that she will have trouble finding customers. On the phone, she sighs deeply and says, “I must get out of Afghanistan before it is forbidden for us women to even breathe.”

Read More: One year after the fall of Kabul, Afghan women are attempting to build new lives abroad

The 20-year U.S. military involvement in Afghanistan has left many women widows, many of whom are now their family’s only breadwinners—women who have to put food on the table no matter what the suffering and hardships.

After banning women from employment in the civil service and academia, large numbers of women have joined the ranks of street beggars. The Taliban made only one concession: that women who beg are not required to have a mahram, a male companion, when leaving their homes.

From the Taliban’s perspective, the presence of a large number of women in the streets doesn’t challenge their honor, but a woman working in an office is seen as a sign of her independence and empowerment, threatening the religious, social, and cultural identity that the Taliban upholds.

I, however, remember Afghanistan of two years ago very differently.

In Kabul, my apartment was located in the Karte Chahar district across from the Kabul University campus, in a neighborhood with three high schools and five private and public schools. The indomitable enthusiasm and excitement of the girls during the school holidays gave me hope that it was impossible for Afghanistan to return to the dark days of the past. Before the fall of the previous regime, that reality was defined by the presence of millions of girls and women in the education sector and various other walks of life in urban and rural Afghanistan.

Today’s Afghanistan has been defined by the post-Aug. 15, 2021 reality when Kabul, once again, fell to the Taliban. All around me, the Taliban commanded the streets as if they had risen from their graves. They passed by me as though I didn’t even exist. The Kabul University campus was now a ghost town, and no one but the Taliban could be seen on the streets. Black paint was smeared on posters of women’s images on a barbershop window I passed and advertisement posters with women’s images had been torn down.

The city that used to be humming with life and cheerful crowds was no more. Instead, there was the milling of distraught crowds of young and old, men and women, around the Kabul Airport, queuing up for their last hope – a way out.

In the last days of August 2021, I watched the American military planes through my 10th floor apartment window as they took off and landed from the hell-on-earth that was the Kabul Airport. My concern was for the women of Afghanistan: How many women can these military planes rescue? Where will they take them? What will become of the women who are left behind? Will women be suppressed again under the yoke of misogynistic slavery? Are the Taliban “saving” Afghans from sin and corruption by establishing the “Islamic” version of Gilead in Afghanistan that will spawn yet another Handmaid’s Tale? Will Afghan women be subjugated in a 21st-century serfdom of the Taliban? Will Afghan women fight for their rights at the ballot box as an alternative to Taliban rule? Or will these girls and women be crushed the way we were in 1996?

I lived under the Taliban regime from 1996 to 2001, and I have seen their world from under my burqa. Girls’ schools were shuttered, shopkeepers were threatened not to sell to women who didn’t have a mahram, and all women were expelled from public and private offices. The Taliban ordered men to protect and herd their wives, daughters, and sisters “properly,” as if they were livestock.

Tucked away from the Taliban’s eyes early in the spring of 1997, those of us who were once in school gathered for a meeting in the safety and privacy of the women’s public bathhouses to discuss our future. It was there that the first feminist political action by the girls of my hometown, Herat, took place. We planned a public demonstration against the Taliban, calling for the reopening of our schools.

Our 10-girl-strong demonstration started on a Wednesday morning and ended instantly. An angry armed guard stood in front of the governor’s office and swore that if we didn’t leave immediately, he would gun down every one of us. Soon after that incident, the women’s bathhouses were closed. Several of the girls I knew from the bathhouse gatherings committed self-immolation. The rest of them were forced into arranged marriages, often to members of the Taliban.

In the summer of 1997, when five brave young men of Herat also tried to protest the Taliban, they were accused of conspiracy against the Islamic Emirate. They were beheaded and hanged from the meat hooks of butcher shops. The rustic and traditional city of Herat could not protest this Taliban crime. No voice was raised after that. No protest was organized.

The war-weary grown-ups, exhausted by civil war, simply surrendered their fate to the Taliban law. For 10 long years, they had fought against the Russians to honor and liberate the homeland—they had paid their dues.

The plight of women under Taliban rule did not concern the men much. But they were not alone in abandoning us. The world community turned away as well. While many men suffered, it was the women who paid the highest price. As the outside world espoused third-wave feminist slogans, they couldn’t be heard by the faraway and locked-up women of Afghanistan—and their plight couldn’t be heard either.

During the two decades after the fall of the Taliban in 2001, girls went back to school and women filled the rank and file in the public and private sectors of society. Women played a major role in the development of their country. A new generation grew up in Afghanistan that did not expect to see the Taliban as the only reality for Afghanistan.

It was quite clear that, this time around, the girls and women of Afghanistan would not be silenced and would stride farther than the previous generations of Afghans. It took some time for women to come out of the shock of the government’s sudden collapse after the U.S. withdrawal, but ultimately they returned to the streets in protest. Girls in Badakhshan, Herat, Kabul, and Mazar-e Sharif took to the streets in small groups risking the wrath and pain of Taliban whips. They raised their voices for freedom and justice in front of school gates, on the street, and on university campuses.

The many miseries and gender apartheid that have befallen women in Afghanistan like Maryam are not the responsibility of the Afghan women alone. It is a crime against humanity and must concern every human being on this planet. 20 million women have been taken hostage by the Taliban—20 million women locked away, herded, denied basic rights, abused, and have literally vanished from daily life. If they’re not already buried underground, they are virtually buried alive.

Maryam’s firm, strong, and telling voice is a testimony that she does not and will not spare any effort for herself or her children. She is determined to continue to fight along with many other women, but they cannot defeat the Taliban alone.

The liberation of the women of Afghanistan is the responsibility of all the countries that believe in human rights and that have protected their interests on Afghan soil for the past 22 years.