On Monday, Palestine Solidarity Legal Support (PSLS) and CCR released findings regarding the increasing use of accusations of anti-Semitism on U.S. college campuses to suppress speech critical of Israeli policy.  Between January and April of this year, PSLS documented 60 incidents involving accusations of anti-Semitism made against students or faculty and 24 incidents involving accusations that students or faculty were “terrorists” or “supporters of terrorism,” based solely on speech critical of Israeli policy.  At two universities, for example, votes on divestment resolutions were blocked because Israel advocacy groups claimed they would create an anti-Semitic climate. 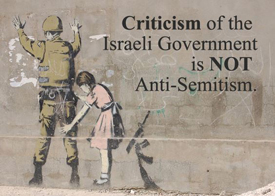 Such attacks deliberately conflate advocacy on behalf of Palestinian human rights with anti-Semitism in order to undermine such advocacy, including the growing boycott, divestment and sanctions (BDS) movement, as a way to shut it down. They thereby violate the free speech rights of students and scholars and undercut the university as a place of debate and critical thinking; they also detract from the fight against true anti-Semitism. Complementing the release of the findings was an analysis of the political context by Dima Khalidi, founder and director of PSLS and CCR cooperating counsel. Also on Monday, Jewish Voice for Peace (JVP) delivered a letter signed by over 250 academics to the U.S. State Department, asking it to revise its definition of anti-Semitism in order to prevent the charge of anti-Semitism from being misused to silence critics of Israel.

CCR represents Professor Steven Salaita, who was terminated by the University of Illinois Urbana-Champaign from a tenured position for tweets critical of Israeli policy – which were also called anti-Semitic.  A court date scheduled for last week on the university’s motion to dismiss his case was cancelled, and we are awaiting a written decision.